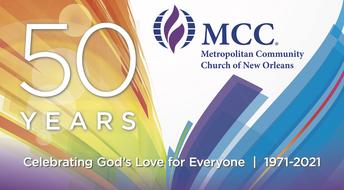 History of Our Church

History of Our Denomination

In 1968, a year before New York’s Stonewall Riots, a series of most unlikely events in Southern California resulted in the birth of the world’s first church group with a primary, positive ministry to gays, lesbians, bisexual, and transgender persons.

In the early 1960s, Rev. Troy Perry was defrocked as a clergyperson by a Pentecostal denomination because of his homosexuality. He spent the next several years struggling to reconcile his sexuality and his Christian spirituality. Those events, a failed relationship, an attempted suicide, a reconnection with God, an unexpected prophecy, and the birth of a dream led to MCC’s first worship service: a gathering of 12 people in Rev. Troy Perry’s living room in Huntington Park, California on October 6, 1968.

That first worship service in a Los Angeles suburb in 1968 launched the international movement of Metropolitan Community Churches, which today has grown to 43,000 members and adherents in over 300 congregations in 22 countries. Since its founding, MCC’s prophetic witness has forever changed the face of Christianity and helped to fuel the international struggle for LGBT rights and equality.